No Result
View All Result
NEWSLETTER

No Result
View All Result

by admin
in Politics
0

Tennessee’s population grew nearly 9% between 2010 and 2020 and is now the sixteenth most populous state in the union, according to new information released by the U.S. Census Bureau.

The new data showed the addition of 541,466 new residents made Tennessee rank eleventh out of the 50 states and District of Columbia in terms of which states gained or loss individuals. The state’s 8.49% population increase made it rank seventeenth in terms a percentage change to population.
Overall, Tennessee is home to 2.07% of the total population of the U.S.

The state went from the seventeenth most populous state in the nation in 2010 to sixteenth in terms of overall population. Tennessee recorded a total population of 6,916,897 (almost 7 million) in 2020, up from the more than 6.37 million reported in 2010.

The Tennessee State Data Center at the University of Tennessee’s Boyd Center for Business and Economic Research said the state has actually seen a decrease in its population gains in the past two decades. The state saw its population increase by 16.7% between 1990 and 2000 and 11.5% between 2000 and 2010. This slowing increase in population is mirrored on the national level with the U.S. seeing the lowest rate of population gain experienced since the 1930s.

“Although our growth rate was slightly lower last decade, the 2020 population counts did exceed the pre-census estimate of an 8.3 percent increase,” said Tim Kuhn, director of the Tennessee State Data Center. “We have to wait to learn more, but we are very thankful to the Tennesseans who completed the census and to the public and private leaders across the state who helped promote a complete count of our residents.”

Studies have shown that the increase in Tennessee’s population during the past 30 years is a result of migration – more people moving into the state than out – than it is by the number of new births exceeding the number of deaths. Tennessee has seen a decline in birth rates every year since 2007.
In addition to keeping tabs on population, Census numbers are an important resource when it comes to the allocation of funds and the setting of political boundaries on all levels of government.

These recent numbers were a part of the U.S. Census Bureau’s annual apportionment results, which use the population of each state to determine how many members of the U.S. House of Representative each state is allotted. Tennessee joins the majority of states who will see no changes to its House seats. 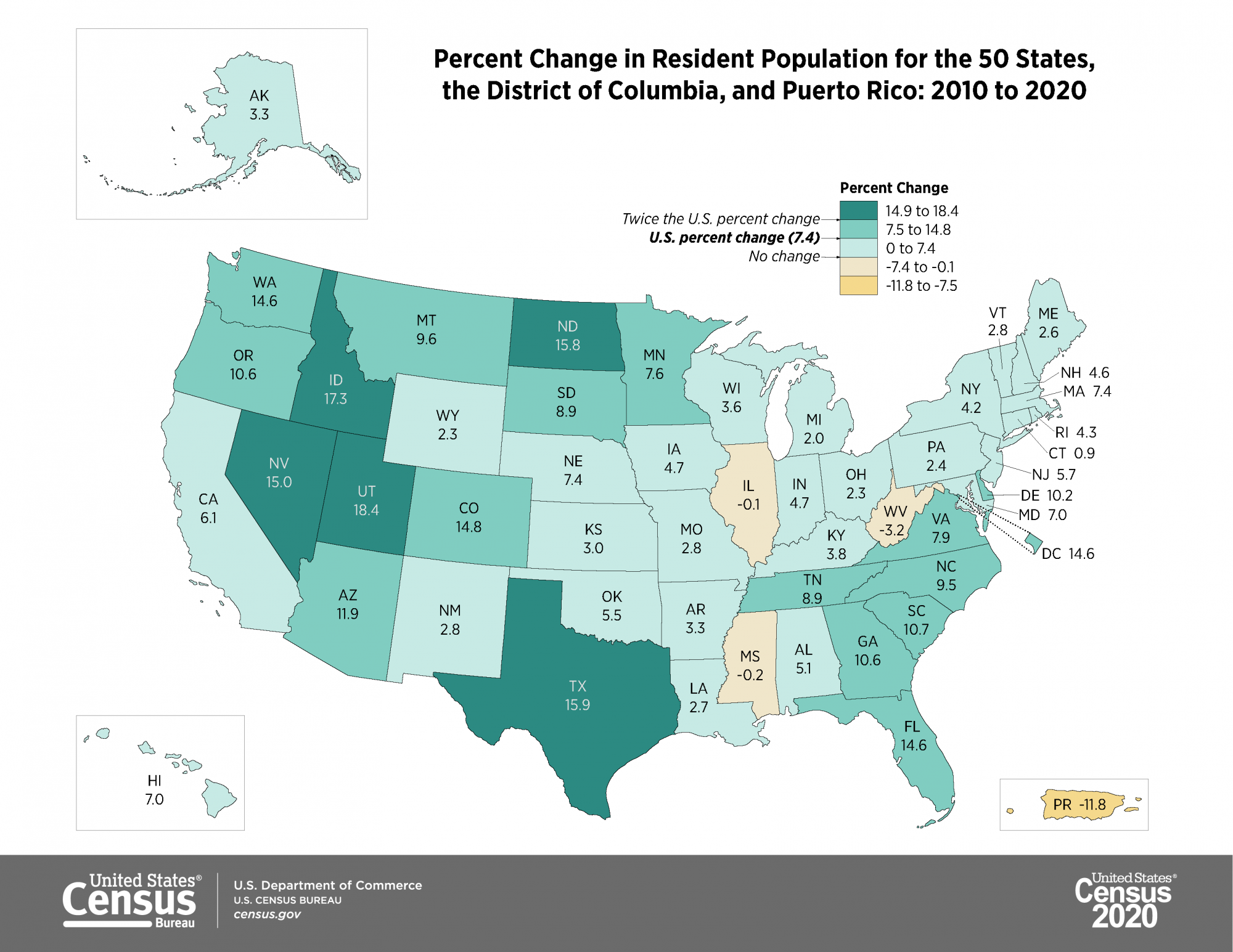 This means Tennessee will keep all nine of its U.S. House seats. The U.S. Constitution determines that the 435 seats in the U.S. House are allocated based on population of each state as determined by the Census.

As a result of the 2020 Census, seven seats in the U.S. House will be moved among 13 states. Texas will gain two seats while Colorado, Montana, Oregon, Florida and North Carolina will gain one. California, Illinois, Michigan, New York, Ohio, Pennsylvania, and West Virginia all lost a seat.

Two-thirds of TennCare is funded through federal dollars determined by the Census with TennCare accounting for half of all federal money in the average Tennessee state budget.
The Tennessee Data Center said population and housing counts for counties, cities, and statistical areas are expected by late August. This data will be used for future Tennessee state-shared revenue allocations.

Redistricting data – which includes counts of population, voting age population, race, ethnicity, and housing units down to Census block-level – are expected by the end of September. The 2020 Census Redistricting Data will help determine new boundaries for political districts, ranging from county commission to city council, as required by law. That redistricting process will begin in March 2021.

“The redistricting data are very important numbers for cities and counties across the state,” Kuhn said. “Rebalancing population among political districts is the most oblivious use. But these data are also used to access a community’s growth and look at housing vacancy rates, and they are incorporated into funding formulas. These uses are all dependent on the more detailed census data that will come later this summer.”

Exclusive: After Pushback HarperCollins Will Not Produce ‘God Bless The USA’ Bible

No Result
View All Result